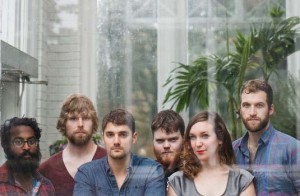 Hey Rosetta! hails from the frosty Northeastern Canadian province of Newfoundland and Labrador. The six piece indie ensemble is comprised of founder Tim Baker on guitar, piano and vocals; Josh Ward on bass; Adam Hogan on lead guitar; Phil Maloney on drums; Romesh Thavanathan on cello; and Kinley Dowling on violin. They have released three records: Plan Your Escape (2006), Into Your Lungs (2008), and last year’s Seeds [produced by Tony Doogan, producer for Belle & Sebastian and Mogwai].

Known for their energized live shows, the band creates a massive, layered sound by incorporating piano, violin and cello into the traditional four-piece garage rock sound. Key to the strings section is Jack of All Trades, Romesh Thavanathan; who actually does quadruple duty involving guitar, keyboards, and percussion. Make that quintuple duty since he also sings. Thavanathan has been playing the cello since he was six, and received a degree in classical music from Memorial University.

We reached Thavanathan at his home in St. John’s to ask a few questions.

GIK: Romesh, you play cello, keyboards, guitar and a multitude of percussion instruments.  Which instrument is your favorite to play? 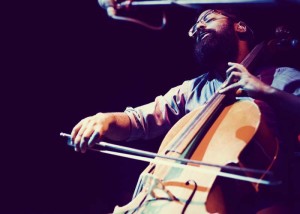 RT: All of them have their perks really. I’ve been playing the cello the longest and is probably the only one I’m actually halfway competent on so I have a good deal more ability to translate emotions. When it comes to keyboards I’m a bit more of a kid taking his first baby steps. I don’t entirely know my way around but it breeds a different type of creativity where you just get to tinker around. But what trumps any of this is being able to turn an amp up on stun and just destroy the world. So I guess to answer your question I’d have to pick the guitar.

GIK: Your arrangements are very layered and the cello has such a big resonant body how do you generally record the cello? What sort of techniques do you use?

RT: Obviously it’s pretty song/ arrangement dependent. Generally speaking though we always try to record the full string section at the same time. It’s terribly hard to replicate the communication and group dynamics of a section working together and playing off each other in a strict one at a time overdub situation. On cello I personally like a ribbon mic 3 or 4 feet off the body to get a smoother round close up sound and then depending on the room/ song having room mics set up to create the width and depth you need whether that ends up being an x-y pair or one mono mic crushed. Experimenting with re-amping the string section always ends up with some fun tones to mix in parallel or even use straight up. Guitar pedals are your friend!

GIK: Tony Doogan is an interesting producer, and has worked with a diverse set of bands and sounds – how did you find working with him?

RT: It was precisely that diversity that caused us to ask him to work with us. We tend to cover a lot of ground on our records in terms of sonics and styles so working with someone who had access to all of those sounds was a pre-requisite. Tony was quite a wizard when it came to the engineering side of things. Some of the drum sounds he pulled out were really inspiring. Being able to observe someone manipulating a kit and it’s environment was an absolute pleasure.

GIK: You’re in the process of setting up a home studio and working on solo projects. What is the most important part of your recording / writing process? 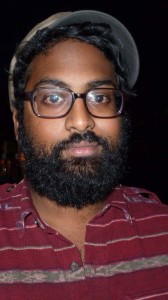 RT: Hmmm… I suppose the most important part would be getting in the right headspace and how to facilitate staying there. I find I’m still struggling with this because it’s easy to get caught up in the recording and engineering side of things and slipping out of the creative space you were in. The idea of writing and following ideas and letting that side flow is one state of mind that shouldn’t be interrupted. Then once that process has run it’s course you can go back and tinker with sounds after the skeleton is holding itself up. Then those sounds can help inspire the next round of writing and then you repeat the cycle. It’s a bit of a balancing/ juggling act but I think it’s definitely a wise move for the solo writer. Making sure your recording space is prepped and organized to get your ideas down quickly and efficiently is the crux to making this system work. I don’t think ergonomics is considered enough when it comes to studio setups.

GIK: How has GIK Acoustics helped with your home studio?

RT: Well my room is still a work in progress but the 6 Tri-Trap Corner Bass Traps© I have had set up for around six months or so have made a significant difference in the room’s sound. There’s no longer an uncontrollable sonic imprint to the room. I had never felt comfortable recording everything in one space before as the stacking of tracks all recorded in the same boomy space causes all sorts of problems in a mix but I no longer fear that. The treatments have even helped keep my tracking flow since I don’t have to find “that one spot” in the room where your amps respond and translate like you want. There’s much more confidence on playback that your sounds actually are what you’re hearing and I’m really looking forward to the next steps to create a mix environment that I can really trust. In a small home studio where acoustics weren’t even close to being considered in the room’s construction, treatments are an absolutely necessity. Getting control of your room acoustics really is a no brainer.

GIK: What sort of advice or tips you would offer to up-and-coming recording artists, songwriters or classical musicians?

RT: Always enjoy yourself but make sure you put the time in. There’s no equivalent to long, hard, arduous, often self deprecating, sometimes depressing but ultimately rewarding work and experience when it comes to song writing, performing, or recording. Just play and write as much as you can and you’ll get your mistakes out of the way early on and you’ll find yourself on a good path. In fact, I’ll leave you with a great Ira Glass quote because he says it better than I ever could.

“Nobody tells this to people who are beginners, I wish someone told me. All of us who do creative work, we get into it because we have good taste. But there is this gap. For the first couple years you make stuff, it’s just not that good. It’s trying to be good, it has potential, but it’s not. But your taste, the thing that got you into the game, is still killer. And your taste is why your work disappoints you. A lot of people never get past this phase, they quit. Most people I know who do interesting, creative work went through years of this. We know our work doesn’t have this special thing that we want it to have. We all go through this. And if you are just starting out or you are still in this phase, you gotta know its normal and the most important thing you can do is do a lot of work. Put yourself on a deadline so that every week you will finish one story. It is only by going through a volume of work that you will close that gap, and your work will be as good as your ambitions. And I took longer to figure out how to do this than anyone I’ve ever met. It’s gonna take awhile. It’s normal to take awhile. You’ve just gotta fight your way through.”
― Ira Glass

Hey Rosetta! will play at Lollapalooza 2013 in Chicago. You can check out the band’s latest single “Carry Me Home,” culled from Hey Rosetta!’s holiday EP, A Cup of Kindness Yet.  For tour dates and more info, visit their website: www.heyrosetta.com